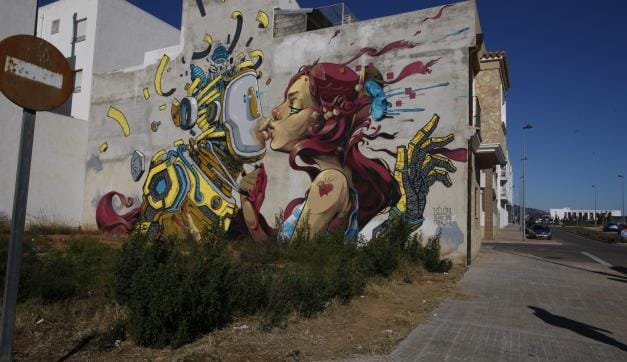 Cítric is an initiative that took shape in the Town Hall of Torreblanca in an effort to create a cultural initiative with a local flavour. To this end it has developed a project with a philosophy that retakes the grassroots of street art with graffiti as its principal mode of expression. Since 2015, the event has filled the streets of Torreblanca with art and colour. Promoted by the Regional Ministry of Culture and sponsored by the company Infertosa with collaboration from the MIAU in Fanzara, it seeks to develop neo-muralism through collaboration by different artists in the national landscape who come to Torreblanca to engage in creative activities together.

The works of Cítric are the outcome of collaborations by artists involved in street art who come together to live and create in Torreblanca for several days. This is one of the main stimuli behind the event, since all the works are acts of collaboration. The artists mix their ideas and styles to create a mural that brings together the concerns and interests of each one. The result of their work is a mural that radically changes the appearance of a blank wall. These spectacular works of street art go back to the roots of graffiti, to the notion of teamwork. Cítric already has seven different works in its catalogue.

Over the course of time an increasing number of residents have donated their walls so that they can form part of the catalogue of Cítric.

The cultural potential of Citric is another tourist attraction in Torreblanca, which include the Parc Natural del Prat and the beach at Torrenostra.